Something for the Weekend: Joey Gibson

Here is Playboy Playmate of the Month for June 1967, Joey Gibson, having fun with her sandcastle and soldiers on the beach.  This is the only Playboy Centrefold which contains model soldiers so should be revered.  There is nothing like going to the beach and building sandcastles.  Or at least there wasn't when the Legatus was small.  Provided, of course, that you had enough soldiers to take down to the beach with you.  I had a rather random collection of Britains Herald Trojans and Greeks (which were my favourites, despite having the bendiest spears in existence) and Cowboys and Red Indians (that's Native Americans to you young people).  I had some WW2 Germans (all with soft caps, oddly) of unknown provenance. I also had some Timpo American Civil War figures which I liked as you could take them to pieces and put them back together again. 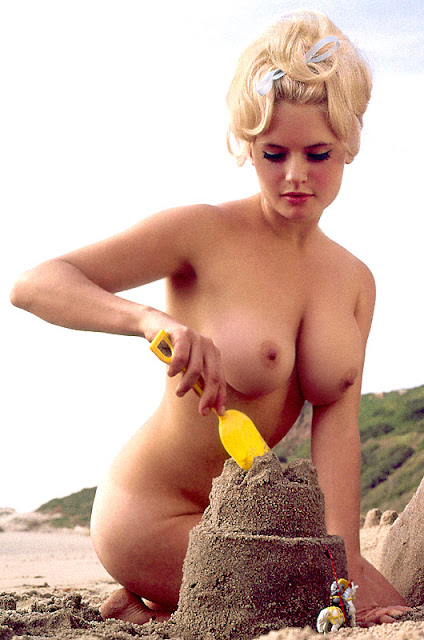 What I never had, and what would have been perfect for the increasingly ornate sandcastles I built on the beach at West Wittering, Sussex, were any knights in armour.  So I would have been very envious of Miss Gibson's splendid high medieval knights.  My father, who hated the beach, and who joined the Playboy Club when it opened in London in 1966, would have been more impressed with Miss Gibson, I suspect. 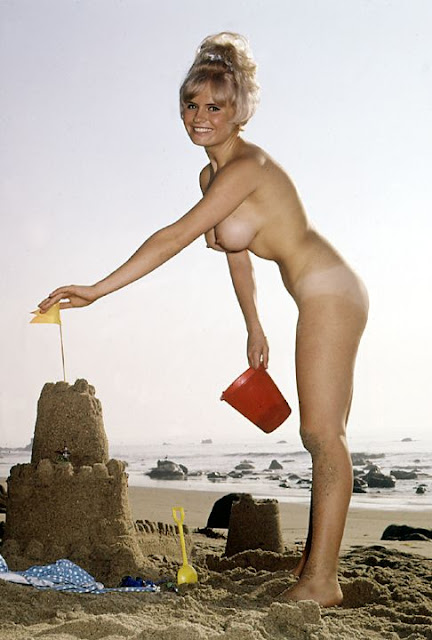 As Joey knows, flags always give a sandcastle that certain je ne sais quoi and at windy Wittering they would flap about like mad. You used to be able to buy packs of paper flags with wooden sticks in the funny little beach shop there.  I seem to recall that they consisted of flags of the UK: Scotland Wales England and such, with other random ones like red flags with yellow lions on. Hard to remember 45 years later!  Better than Miss Gibson's flag anyway. 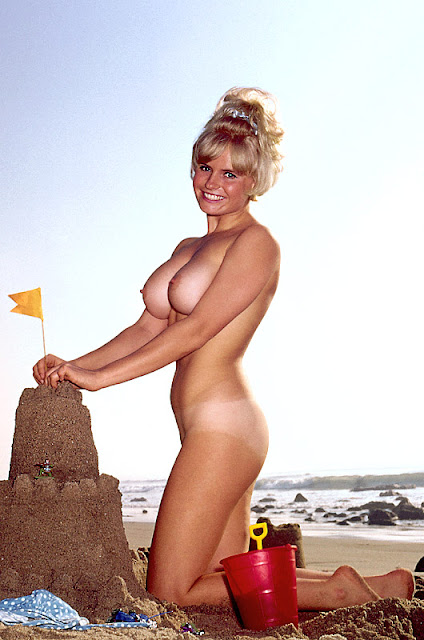 Joey's pictures were taken by Peter Gowland, top photographer and bit part actor (he even appeared in Citizen Kane). She was 39-25-36 at the time, in case you were wondering. 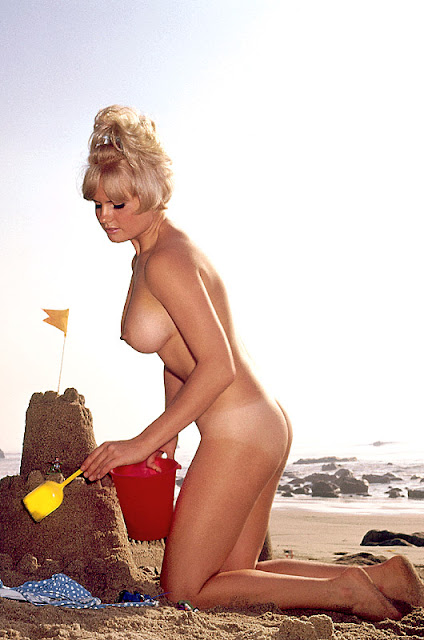 Unfortunately, one month after her Playboy issue came out Joey (who gave her name to police as Nancy Cole) was arrested for prostitution in Santa Monica where she was found in a room with a man and another woman.  She denied the charges but was found guilty of soliciting.  Should have stuck to playing soldiers on the beach.  Probably trying to make some money so she could invest in a catapult.

Posted by legatus hedlius at 05:12