Something for the Weekend: A lady Gulliver? 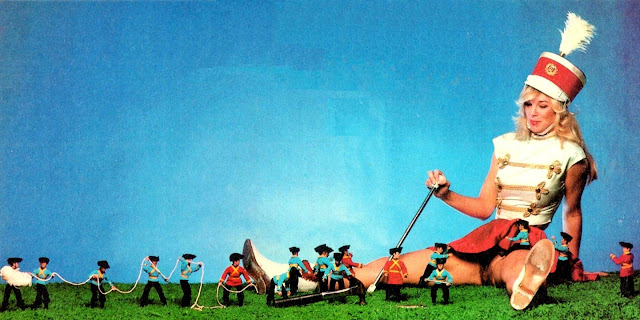 A curious confection, this one, from the pages of Oui magazine's March 1979 issue.  Oui was a joint venture between Playboy in the US and Lui in France.  In the spring of 1972 the Playboy team learned, to their horror, that new rival Penthouse, which was eating into Playboy's circulation at an alarming rate, was planning to launch a second men's magazine in the US in conjunction with French publisher Daniel Filipacchi. 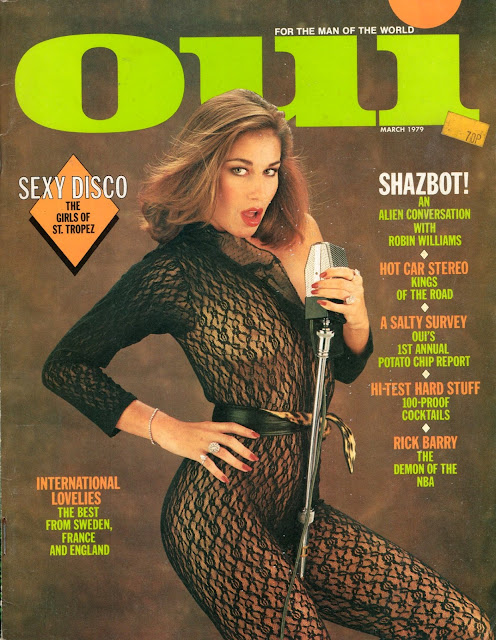 In the early sixties Filipacchi had decided to launch a magazine in France that would be more like Playboy, with its wider lifestyle interests, than the dozens of girly magazines then being published in the country at the time. The most popular men's magazines in France at this time were the digest sized Paris-Hollywood, first published in 1946, and La Vie Parisienne which had been published ever since the eighteen nineties! France, which had invented the girly magazine, was finding that Playboy and the new American magazines arriving in its wake, as well as European competitors from Scandinavia, were making its men's magazines look very dull and old fashioned indeed. Filipacchi was originally a fashion photographer and had then moved into radio broadcasting, music production and then became a publisher of music magazines. He set up Lui with his friends Frank Ténot and Jacques Lanzmann. The first edition came out in November 1963 and was an immediate success, so Hefner, in 1972, could see that Filipacchi's team had staying power. Playboy barged in whilst negotiations with Penthouse's Bob Guccione had been all but concluded and somehow persuaded Filipacchi that a tie up with Playboy would be better than the deal with Penthouse. Playboy had realised that if there was going to be a publisher with two magazines in their stable it had to be them and not the upstart Guccione, who had invaded their turf from across the Atlantic. Penthouse, it is often forgotten was originally published in London and didn't start production in the US until four years after its 1965 debut in the UK.

Hefner's vision on this arrangement was quite clear. Filipacchi would get the license to publish Playboy in France and Playboy would get to publish a new magazine, based on Lui and its stylish pictorials, in the US. The magazine would, according to Hefner have a "European accent in its humor, reviews and approach to photography". It would be aimed at the younger market which Penthouse had targetted and would release Playboy from having to compete with Penthouse in more and more explicit photographic content. Guccione was furious, of course!

Oui was, indeed, somewhat more "European"  (for which, read naughtier) in its outlook compared with Playboy. There were no girl-next-door types gracing the pages of Oui, just the top models of the time photographed by the top photographers.  It was quirkier than either Playboy or Penthouse and often photographed its girls in a more original way, as we can see here.  These two pictures topped and tailed its news section that month.

In the end Oui failed as a device to stop the rise of Penthouse in the US and embarrassingly for Playboy, they discovered that Oui's growing circulation was at the expense of Playboy, not its rival.  Oui never made a profit and Hefner quietly sold it in 1981, ironically to a former Penthouse executive.

What prompted the picture editors of Oui to combine a knickerless baton twirler with Lilliputian troops in tricornes I do not know but it makes for an interesting diversion...
Posted by legatus hedlius at 12:52

Email ThisBlogThis!Share to TwitterShare to FacebookShare to Pinterest
Labels: Magazines